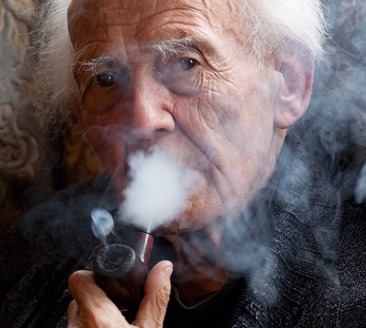 By Emilee Moore, University of Leeds

On 5th October 2016, Emeritus Professor Zygmunt Bauman spoke at the Bauman Institute at the University of Leeds on the topic of ‘Europe’s Adventure: Still Unfinished?’ The lecture was part of a series of events taking place at the University of Leeds around the subject of Brexit. Prof. Bauman began his talk by positioning himself as a ‘remain’ voter, but clarified that his aim was to paint a picture of society that was wider than Brexit itself. He claimed that Brexit is a window on contemporary processes in and beyond Europe that might otherwise go unnoticed. The talk prompts us as a team to similarly step back and consider the wider implications of recent events that have had a direct impact on our research participants, as we documented earlier in our blog post on linguistic xenophobia.

Prof. Bauman structured his talk in three parts. In the first part, he defined what he saw as the retrotopian times in which we are living. According to Prof. Bauman, we are living in a cosmopolitan world, but as ‘savages’ that haven’t yet even begun to develop cosmopolitan awareness of what that means. Younger generations today are the first since the Second World War to expect less opportunity of the future world than what was possible in the past. According to Prof. Bauman, utopia, the idea of a better life, was always located in the future, but that is no longer the case. Fantasies remit us to the past, giving rise to a politics of memory.

In the second part of the lecture, Prof. Bauman introduced two categories of arguments in favour of Europe. The first, he said, was aboutpragmatics, about survival. Referring to author Elena Ferrante’s ‘Dear Britain’ letter in The Guardian, he asked: Can we deal at the level of the nation-state with problems that are already global? Does the nation-state have the instruments of governance to deal with cosmopolitan issues? The second argument was a moral and aesthetic one, which Prof. Bauman exemplified using a citation from Pope Francis. Is life together safer, more secure? Does living together make life more meaningful, more hospitable?

Finally, Prof. Bauman spoke directly on the issue of Brexit. In doing so, he introduced the notion of a penalty for success as one explanation for the referendum result. According to Prof. Bauman, the safety, freedoms and mobilities that the European Union has brought about, in comparison with other periods in European history, have also created the conditions for people wanting to take care of their own interests. A second explanation for the referendum result is the falling trust in the present day political system; according to Prof. Bauman, people have stopped believing that governments are capable of delivering their promises. Trust has not been lost in a particular party, but in the whole system, leading people to seek some sort of new political organisation, a way to express their totality of dissent. The fact that both of the major political parties aligned with the ‘remain’ campaign allowed voters to express their extreme dissatisfaction with the establishment as a whole, their disagreement with the whole political system.

The recorded lecture will soon be available on the Bauman Institute website.

With thanks to Elisabetta Adami and Marco Santello for their comments on first draft of this blog post.