By Szymon Parzniewski and Anja Benedikt

This ESRC-funded conference included high profile speakers from the UK, Germany and Russia who shared their research on immigration discourses and immigrants in different cultural, historical and political contexts. The interdisciplinary event was organised by PhD students and supported by the Institute for Research into Superdiversity (IRiS) and the Institute for German Studies (IGS).

As pointed out by Prof. Jenny Phillimore during the conference opening, the timing of the conference was very well placed due to the on-going refugee crisis in Europe and arguably the ‘moral panics’ found in the media and policy circles in different countries. Although in recent years a proliferation of conferences and seminars focusing on the role of migration and integration of migrants can be observed, a clear gap of the specific focus on migration discourses was identified. This conference hence intended to provide the space to particularly discuss the topic of migration discourses and to break new ground by considering interesting case studies from different countries with different cultures and political systems. The conference also provided a platform to address some of the most important immigration discourses and their formation from various distinct theoretical and methodological approaches.

In his keynote speech Prof. Christian Joppke (University of Bern) gave distinct insights into citizenship scholarship and practice by grounding his paper in the three structural observations regarding: the nature, the value and the form of citizenship. Prof. Joppke further explored and revisited his concept of citizenship lite’ in reference to the contemporary ‘paths of liberalisation’ that can be traced in the European Union.

On the other hand, Prof. Ruth Wodak (Lancaster University) presented in her keynote speech the discursive constructions of ‘strangers’ found in right-wing party discourses in Europe. Based on an analysis with the discourse-historical approach including both content and linguistic structures (metaphors, topoi), Prof. Wodak elaborated on the so-called politics of fear, whereby the ethnic and cultural elements of minorities are used to employ them as scapegoats and as a threat.

The event also included three expert panels focussing on the following: “Labour Migration and Lingual Integration Discourse in Russia”; “Discourse on Border Security and Diversity”; “Immigration and Discourses surrounding Muslims”. Lastly, the conference also featured a student panel in which four PhD students had the opportunity to receive first-hand feedback from the leading scholars in their field. 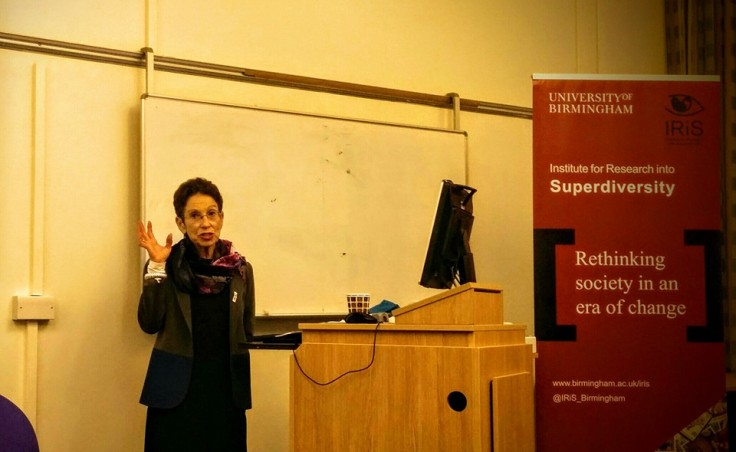 Prof. Ruth Wodak delivering a keynote based on her recent book: “The Politics of Fear: what right-wing populist discourses mean”

The topics of all papers presented at the conference mirrored not only the fruitful broadness of the topic at hand, but also the myriad factors that influence contemporary immigration discourses in various settings. Hence, the conference provided a space within which scholars could come together from across disciplines to bring new insight into the discursive formation not only of the media but in general and of political dynamics surrounding immigration issues. Further information with regards to the conference as well as the audio recordings can be found on the website.